Alright, today I’m talking about a topic that I hadn’t really considered in this particular way  until I started my “independent study” so I want to give lots of credit to the book When Helping Hurts: How to Alleviate Poverty Without Hurting the Poor . . . and Yourself

and the Chalmers Center for Economic Development at Covenant College.

I remember when we were preparing for our Spring Break trip to the Dominican Republic- my first ever intentional trip to a developing country- and one of the college leaders of our church said, “You know, we’re not going on this trip to build the Dominicans new garages so they can keep more stuff in storage.” His point was that we’re not supposed to be making people from developing countries look more like those of us in the Western world. Of course, we’re not going to build a poor person a garage, I thought. But maybe we’ll build them a better house. Now, I’m not sure that’s the best idea either. I don’t think I realized how deeply the American culture of materialism affected my views about poverty.

According to the book When Helping Hurts

, having a materialistic view of poverty leads us to come up with materialistic solutions. They asked people “What is Poverty?,” and found that those who are poor have different answers than those  who are not. “While poor people mention having a lack of material things,… poor people typically talk in terms of shame, inferiority, powerlessness, humiliation, fear, hopelessness, depression, social isolation, and voicelessness. North American audiences tend to emphasize a lack of material things such as food, money, clean water, medicine, housing, etc.”(pg. 53). The distinction affects whether we are just treating symptoms or getting at the root causes and whether we are accurately diagnosing those root causes and prescribing the appropriate solutions. 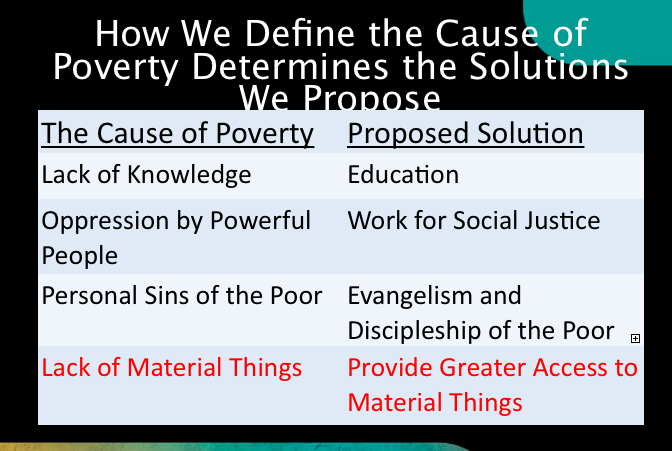 Here’s an alternative definition of poverty: “Poverty is a result of relationships that do not work, that are not just, that are not for life, that are not harmonious or enjoyable,” according to Bryant Miller in Walking with the Poor, pg. 86. The poor describe their poverty in psychological and social terms, in relational terms, not merely materialistic. Poverty is not just about what we do or do not have. Here’s where faith is at the center of the picture again. The When Helping Hurts book suggests that to be all that God created us to be, we need well-functioning relationships with:

Broken or dysfunctional relationships in one or a combination of these categories constitutes poverty. Therefore, true poverty alleviation is holistic and will work at restoring relationships with God (spiritual intimacy), self (humility, self-esteem), others (community), and creation (stewardship).

There is also the sense that in some of these relationships, someone we consider “poor” is likely much richer than we are- in relation to God or to others, for example. Too often we North Americans tend to serve with a “God Complex.” I don’t like to think that I’m better than someone or that I know everything there is to know, but I am motivated to help the poor in part because I want to feel worthwhile, accomplished, significant- isn’t that trying to be like God? The God Complex is considered a “poverty of being,” or an unhealthy relationship to yourself. “One of the many problems in many poverty alleviation efforts is that their design and implementation exacerbates the poverty of being of the economically rich- their god-complexes- and the poverty of being of the economically poor- their feelings of inferiority and shame” (pg. 65).

Instead of making sure poor people have more material things, true poverty alleviation will empower people to earn sufficient material things on their own. “The goal is to restore people to a full expression of humanness… to see people restored to being what God created them to be: people who understand that they are created in the image of God with the gifts, abilities, and capacity to make decisions and to effect change in the world around them; and people who steward their lives, communities, resources, and relationships in order to bring glory to God” (pg. 78, 81). What this means in practical terms for poverty relief will be the topic of upcoming posts.