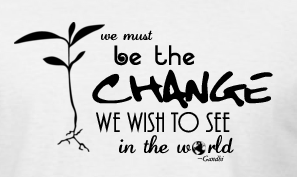 This image was actually a design I used in my job last year when we made student service day t-shirts. When I had my “farewell party” of sorts, my former staff and students all wore the shirts and covered up a key letter with tape to make it say “be the Chang,” which was very endearing. Anyway…

This is another quote for my Quotes & Images series that means a lot to me. It emphasizes how we cannot be just hopers, wishers, and dreamers, but we must also act. And it’s not about getting other people to change, it’s about starting with ourselves; demonstrating what’s possible in hopes that others will catch on. Because if we are not willing to make the sacrifices for a better tomorrow ourselves, how can we ask someone else to do it?

The quote also has a convicting, personal note to it. I usually think of it in terms of big picture, world-changing things but it’s also relevant to the “smaller” stuff. Have you ever witnessed another person complaining about how someone else should stop doing this or that, when ironically, the very behavior they are criticizing is one that they regularly do themselves? Do you ever wonder if you 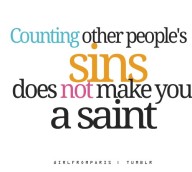 do this? I do… I’m also curious if there is a correlation between the negative comments we make (or thoughts we think) about others and our own short-falls that are somehow related but that we’re not aware of. I’m trying to pay more attention when I get frustrated with peoples’ behaviors and ask myself honestly if I am not also guilty of similar shortcomings. As it says in Mathew 7: “You hypocrite, first take the plank out of your own eye, and then you will see clearly to remove the speck from your brother’s eye.” Kind of harsh words. But sometimes we need to hear them. So here’s to more introspection, self-awareness, and working on ourselves before criticizing others. One of my New Year’s resolutions is to be less critical and more encouraging of others. Science Daily reports:

“researchers found a person’s tendency to describe others in positive terms is an important indicator of the positivity of the person’s own personality traits. They discovered particularly strong associations between positively judging others and how enthusiastic, happy, kind-hearted, courteous, emotionally stable and capable the person describes oneself and is described by others.”

Announcement!!! 📢 Come travel with us and learn why we love the city of Hoi An, and the country of Vietnam. We just opened spots up for 2021 (January and March). This is a small group tour for people who don't like tours. 😀 Learn more with the link in the profile.