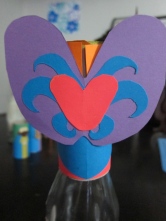 In the Christmas story, several angels are mentioned. Rather than spend much time on the character of angels, I though it would be more interesting to talk about one of their messages. One of the angels essentially tells Joseph to lead his family into becoming illegal immigrants. Doing a Bible search for the word “alien” or “immigrant” (depending on the translation), you’ll find that this was a surprisingly frequent topic from the early Old Testament days up through Jesus’s time. Immigrants were among a special population mentioned over and over again, which also included widows and orphans, as those that Christians should especially care for. Leviticus 19 has one example: “When an alien resides with you in your land, you shall not oppress the alien… you shall love the alien as yourself, for you were aliens in the Land of Egypt.” Doesn’t it seem like the Bible is getting political again? And somehow I had been missing this for years. Here’s what some other folks have to say about it:

“I noticed this Christmas season, for the first time, that not only were Mary and Joseph forced to migrate under Rome’s census; not only was the Incarnate God born into a humiliating space — but, as they fled to Egypt, they never registered in Bethlehem with the census. A dream, an angel, told the migrant father to gather his family and run from the authorities. Unaccounted for in the empire, baby Jesus’ first movement in this world was a government-evading trek through the desert by night.” The Immigrant Days of Christmas

“The policy that God dictated to Israel was one of compassion for the immigrant—grounded in Israel’s history that they too had been immigrants in Egypt…
And our Lord Jesus, … in the closing chapters of Matthew, no doubt recalled the words of Leviticus and the experience of his own family in Egypt.  When you welcome the stranger of the alien,’ Jesus said, ‘it is as if you are welcoming me.‘” Rev Doug Hodges

(By the way, my friend and former student also blogged about this recently.)

First post in over a year and a half!!! A good time to emerge from insta-hibernation and celebrate the union of a dear friend. Going back into hibernation. Let me know when these strange times have finally passed...